Final walk of the year.  And what a lovely one it was too.

Given the harsh frost in the morning, I wrapped up warm - my positively ancient "winter duvet" jacket being dragged out of hibernation yet again.  One day I'll find a suitable replacement that doesn't cost £350+ !

I didn't fancy an out of the door walk so I decided to take some pennies with me and have a bacon sarnie and cuppa at the butty shack at Kelsey Gardens.

And off I set. 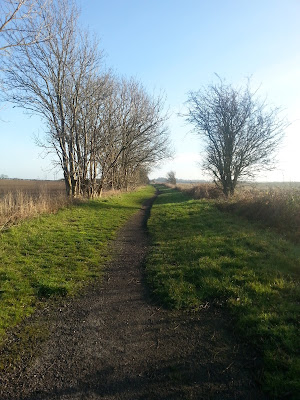 I set off along the (initially) nice, easy disused railway track.  Breathe deeply.... aaaaand relax.  The sun was out, the birds were chirruping away and there wasn't much traffic on the road I was leaving behind.  Lovely.

Further along the track it gets really rutted and turns into an impassible swamp and this is where I decided to do a little trespass by cutting down through the scrubby hawthorn and onto the farmer's field where there is a wide, grassy strip - mainly used by horseriders by the looks of things.  It wasn't exactly dry underfoot, but at least I didn't need waders!

Towards the end of the field I cut back onto the railway line again then changed my mind, deciding to extend my walk and follow Keyingham Drain for a while to the little bridge.  I noticed just how much the drain had burst its banks as I walked along - the flattened bulrushes giving a false impression of solid ground.

As I reached the bridge I remembered that previously I had vowed never to walk this way again after rain, or in winter, or in fact any time when there hadn't been a severe drought the days before and I eyed up the mudbath, sorry footpath, across the field in front of me.

Nice view back along Keyingham Drain from the bridge though. 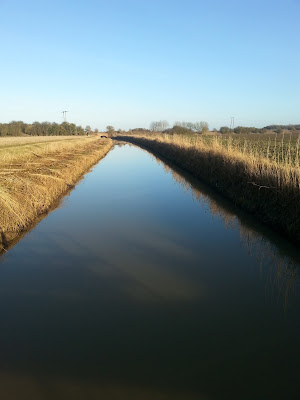 Mudbath negotiated, I climbed up the hill (yes, a hill!), watched curiously by two black cats.  Can you spot them? 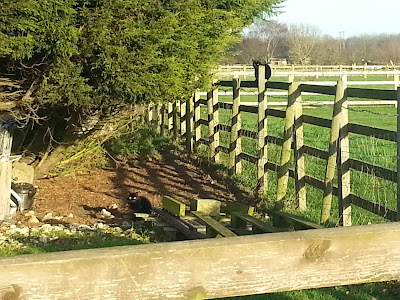 At the top of the hill I entered the village (Keyingham) and decided to walk through the Church grounds, to be greeted by another cat!

Walking through the village I chatted to a few other folks who were out for a "Sunday Stroll" or walking their dogs, before turning off again along the other end of the railway track.

The sun was more in my face now and I wish I'd brought my sunglasses. Then again, why would I want to stop natural daylight hitting my eyeballs when I spend far too much time in artificially lit boxes?!

I noticed the fields were more flooded than normal for this time of year.  Not surprising really given the amount of rain we had in November. 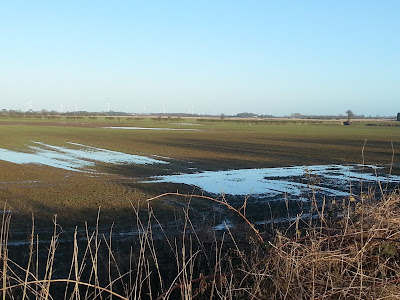 Happy that I'd worked up enough of an appetite for my bacon sarnie and cuppa now, I headed to Kelsey Gardens, only to discover that the butty shack was closed!  Well ain't that just typical! I normally carry a snack and drink with me on this walk and feel guilty eating it here if the butty shack is open.  Today, I'd brought neither in anticipation of a New Year's Eve treat - their bacon sarnies are yummy, if a tad pricey.

I wandered around a bit but a lot of the paths have been closed off for maintenance (an ongoing project of the not so new now management).  I hopped under/over a couple of barriers though to get this pic across South Lake.. 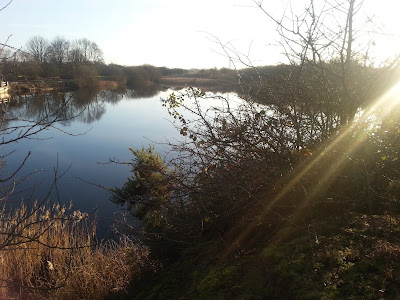 I know the last time I was talking to Ian (manager) he was hoping to re-open the path round the South Lake to create a sort of figure of eight walk around the two lakes and I hope that these closures mean that is in process.  I remember walking round South Lake when I was (a lot!) younger and it was a nice, lumpy, bumpy path with a steep drop into the water if you lost your footing!

Leaving Kelsey Gardens with my tummy protesting loudly at the false promise of food I decided to walk along the quiet lane past "Steptoe's Yard" with some sort of idea of cutting through the woodland to the driveway of Kelsey House.  I couldn't find the path from this side and there were people in the caravan near where I was poking about that might have started to get suspicious if I'd have walked past their "front door".  Then again, I'm not sure they should have been in the caravan so I'll say nowt if they don't.

Instead, I continued along the lane and enjoyed some far reaching (if flat) views.. 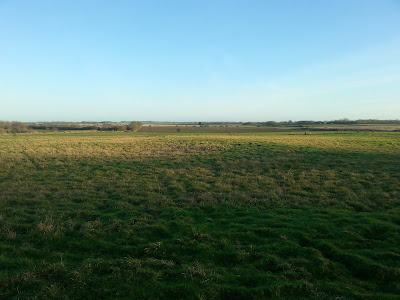 .. as I followed the lane to the main road for the final and least pleasant part of the walk as there's no footpath and cars come tear-arsing along the road.  At least there's a wide verge for the most part and I tried my hardest to get rid of the clay mud off my shoes by walking through the long grass.

I could see my car a short distance away and sorely wished I'd put my pretend crocs in there to change into rather than muddying up the footwell!  Hey ho.  It'll dry and I'll hoover it out ... in about June I expect!

A right nice little walk it was and I returned home to cook my own bacon sarnie (shock).

Once again, no tendon issues, no hip issues and no back issues at all and I could quite happily have walked a lot further than I did.  I'm heading into the New Year feeling quite hopeful I can get out and about a bit more for a few longer walks.

Today's walk also completed my Challenge365 Mile A Day For A Year project, clocking off with a pleasing 367.21 miles.